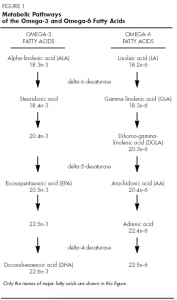 There are four major families of unsaturated fatty acids (see Table 1). Oleic acid is the most prevalent fatty acid in nature and can be synthesized in the body from dietary stearic acid (18: 0).[6] Palmitoleic acid can be synthesized from dietary palmitic acid (16: 0). Oleic and palmitoleic acids are not essential in human nutrition because they can be formed from dietary precursors. Two fatty acids are required in the diets of humans because our bodies cannot manufacture them from dietary precursors: Alpha-linolenic acid, the parent compound of the omega-3 fatty acid family, and linoleic acid, the parent compound of the omega-6 family. Arachidonic acid, a metabolite of linoleic acid, is considered an essential fatty acid (EFA) only when a linoleic acid deficiency exists.[7]

Competition between families. Mammals cannot interconvert the omega-3 and omega-6 fatty acids. Furthermore, their metabolism requires the same desaturation enzymes, resulting in competition between the two families. An excess of one family of fatty acids can interfere with the metabolism of the other, reducing their incorporation into tissue lipids and altering their biological effects.[8], [10]

Metabolism of Alpha-Linolenic Acid (ALA)

Dietary ALA appears to have two metabolic fates. It can be desaturated and elongated to its long-chain metabolites or it can undergo ß-oxidation. Although studies of ALA ß-oxidation in humans have not been conducted, studies in animals suggest that the metabolism of ALA by ß-oxidation may contribute significantly to energy production.[11] Additional research is needed to clarify the relative importance of these metabolic pathways.

Conversion of ALA to EPA and DHA. About 15% of ALA is converted to EPA and about 5% is converted to DHA in a process that is somewhat slow in human.[5],[11] Conversion of ALA to its long-chain metabolites is affected by various dietary factors. A diet rich in linoleic acid, for example, has been shown to reduce ALA conversion by as much as 40%,10 and a high maternal intake of linoleic acid lowers EPA and DHA levels in umbilical plasma, suggesting reduced ALA conversion and availability of omega-3 fatty acids to the developing fetus.[12] Saturated and trans fatty acids also interfere with ALA desaturation and elongation,[13],[14] and in rats, ethanol inhalation results in a significant loss of liver DHA, indicating reduced ALA conversion.[15] DHA can be converted back into EPA in a reaction called retroconversion. This is believed to be a minor metabolic pathway in humans.[16]