A Brief History of Flax 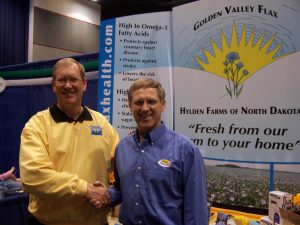 Flaxseed has been used in the diets of humans for thousands of years. The Babylonians cultivated flaxseed as early as 3,000 B.C., and millennia later, in 650 B.C., Hippocrates used flaxseed for the relief of intestinal discomfort. Flaxseed was so important for the health of his subjects that the 8th century king, Charlemagne, passed laws and regulations governing its consumption.[1]

Today, consumers are turning to flaxseed for its many health benefits and pleasant, nutty flavour — a distinctive addition to baked products. Flaxseed provides essential nutrients, including protein, essential fatty acids, and vitamins and minerals; and it contains both soluble and insoluble dietary fiber. Moreover, flaxseed is a rich source of lignans, a type of phytoestrogen. Phytoestrogens are compounds that may protect against certain types of cancer by interfering with the effects of estrogen. Additional information about the nutritional components of flaxseed is given in the following sections.

The major nutritional components of flaxseed are oil and protein, as shown in Table 1. A 100 g portion of flaxseed provides 1,890 kJ or 450 kcal.

A Mix of Fatty Acids

Flaxseed is naturally low in saturated fat and provides a moderate amount of mono-unsaturated fat (see Figure 1). Roughly 73% of the fatty acids in flaxseed are poly-unsaturated. Flaxseed is particularly rich in alpha-linolenic acid (ALA), an omega-3 fatty acid; it contains a lesser amount of linoleic acid (LA), an omega-6 fatty acid. Because of its high ALA content, flaxseed has an omega-6/omega-3 fatty acid ratio of 0.3: 1[2] The growing concern that the linoleic acid content of the typical Western diet is too high has led some experts to recommend replacing dietary omega-6 fatty acids with those from the omega-3 family. Consuming flaxseed or foods rich in ALA, such as omega-3 enriched eggs derived from hens fed flaxseed, increases the omega-3 fatty acid content of the diet and improves the dietary omega-6/omega-3 fatty acid ratio.[3] 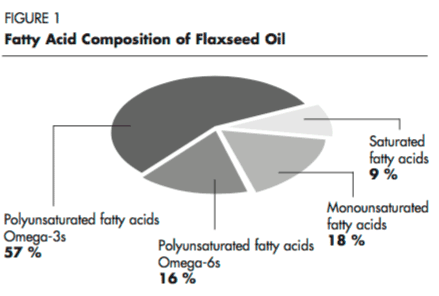 Flaxseed is a very rich plant source of alpha-linolenic acid, an essential fatty acid (EFA) of the omega-3 family.[2] Omega-3 fatty acids have been shown to regulate gene transcription and expression, thus altering enzyme synthesis,[4] and to modify several risk factors for coronary heart disease, including reducing serum triglycerides and blood pressure.[5] They also protect against thrombosis and certain types of cancer and modify immune and inflammatory reactions.[6-8] EFAs are required for maintaining the structure of cell membranes and the permeability of the skin, as precursors for eicosanoids such as prostaglandins and thromboxanes, and in cholesterol transport and metabolism.[9] There are two EFAs in the human diet: Alpha-linolenic acid (18: 3n-3)[*], the parent fatty acid of the omega-3 family, and linoleic acid (18: 2n-6), the parent fatty acid of the omega-6 family.

Lignans are phytoestrogens — compounds found in plants that have weak estrogen activity in animals. [Other common phytoestrogens include isoflavonoids such as daidzein and genistein found in soybeans, some other beans, seeds and whole grain products.[10] The richest source of lignans is flaxseed, which contains high levels of the lignan precursor secoisolariciresinol diglycoside (SDG). Lignans are also widely distributed in the plant kingdom, being present in small amounts in most unrefined grains such as barley, buckwheat, millet, and oats; legumes such as soybeans; and some vegetables. Lignans are not present in appreciable amounts in flaxseed oil.

Flaxseed is a source of dietary fiber, providing about 28 g total dietary fiber/100 g dry weight. About two-thirds of flaxseed fiber is water insoluble and consists of non-starch polysaccharides such as cellulose and lignin.[14] Insoluble fiber helps improve laxation and prevent constipation, mainly by increasing fecal bulk and reducing bowel transit time.[15] In one study of 10 healthy, young adults, bowel movements per week increased by 30% while subjects consumed two muffins containing 50 g/flaxseed daily.16 The water-soluble fibre fraction of flaxseed comprises about one-third of total dietary fiber. The main soluble fiber in flaxseed is mucilage gum.[14] Water-soluble fiber helps maintain blood glucose levels and lower blood cholesterol levels.[15], [17] North American populations are advised to consume more fiber-rich foods,
[18], [19] as high-fiber foods appear to offer protection against certain types of cancer.[20] Epidemiologic studies show that people living in Asia, Africa and eastern Europe have lower rates of certain cancers, particularly hormone-dependent cancers such as cancer of the breast, endometrium and prostate, than people living in Western countries. Their lower cancer rate may be due in part to their high-fiber diet, which helps lower blood levels of lipids and some hormones.[12] The low-fiber, high-fat diet typical of Western populations tends to raise blood estrogen levels, which may contribute to cancer development by stimulating tumor cell growth.[21]

Flaxseed contains essential vitamins and minerals. It is particularly rich in potassium, providing about seven times as much as a banana on a dry-weight basis. Flaxseed provides minor amounts of magnesium, iron, copper and zinc.[22]