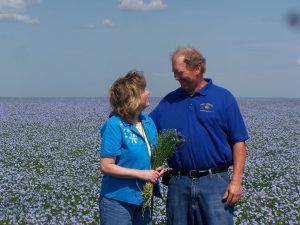 Flaxseed is one of the richest sources of lignans, a type of phytoestrogen. Phytoestrogens are a diverse group of plant-derived compounds that can interfere with estrogen metabolism in animals and humans. In fact, phytoestrogens may have contrary biological effects, exhibiting both estrogen and antiestrogen activity.[1]

Lignans have numerous biological properties, including antimitotic, antifungal and antioxidant activities.[2] Lignans from pine cones[3] and the creosote bush[4] have been shown to inhibit replication of the human immunodeficiency virus in vitro. A newly-identified lignan, cinnamophilin, inhibits thromboxane synthase, which decreases thromboxan A2 production and thereby reduces platelet aggregation and vasoconstriction.[5] Flaxseed and other lignans are currently being investigated for their anticancer properties.

What Are the Major Food Sources of Lignans?

Lignans are widely distributed in the plant kingdom, being found in most unrefined grains such as barley, buckwheat, millet, and oats; legumes such as soybeans; and some vegetables such as broccoli, carrots, cauliflower and spinach. The richest source of lignans is flaxseed. Flaxseed contains high levels of the plant lignan precursor, secoisolariciresinol diglycoside (SDG), and provides 75-800 times more plant lignans than most other foods found in vegetarian diets.[6] Most flaxseed lignans are removed during processing and thus are not found in appreciable quantities in flaxseed oil.[7]

Are Lignans the Same as Lignin?

Lignans and lignin are related structurally — they have in common a cinnamic acid residue and may be synthesized by a similar pathway[8] — but they differ in their biological effects. Lignans are diphenolic structures formed from joining two cinnamic acid derivatives.[8] Hundreds of structurally diverse compounds are classified as lignans, some of which have been investigated for their antiestrogen effects. Lignin is a type of insoluble dietary fibre. Like cellulose, lignin is a structural polymer found in plant cell walls that is resistant to hydrolysis by the digestive enzymes of humans.[9] Cinnamic acid is one precursor of lignin.[10]

What Is the Relationship between Plant and Mammalian Lignans?

Plant lignans are precursors of mammalian lignans. For example, the main lignan precursor in flaxseed —secoisolariciresinol diglycoside or SDG — is converted by bacteria in the colon to the main lignans found in humans and other animals: enterodiol and enterolactone. Enterodiol and enterolactone are called animal or mammalian lignans to distinguish them from SDG and other plant lignan precursors.

What Is the Metabolic rate of Ingested Lignans?

Do Lignans Protect against Cancer?

Lignans may protect against certain cancers, particularly hormone-sensitive cancers such as those of the breast, endometrium and prostate, by interfering with sex hormone metabolism. Lignans have been shown to stimulate hepatic synthesis of sex hormone binding globulin (SHBG), thus enhancing the clearance of circulating estrogen,[12] and to bind to estrogen receptors on SHBG in a dose-dependent manner, thereby inhibiting estrogen and testosterone binding.[14] As SHBG is found in breast cancer cells, the binding of mammalian lignans to SHBG may interfere with estrogen-mediated tumorigenic processes.

Do flaxseed lignans have anticancer properties? Based on animal studies, the answer is, Yes. In one study, female rats fed a high-fat basal diet supplemented with either milled flaxseed or defatted flaxseed meal for four weeks showed decreased epithelial cell proliferation and nuclear aberrations in mammary gland tissue compared with rats fed the basal diet alone.2 In another study, rats with existing mammary tumours were fed a basal diet alone or the basal diet plus SDG, flaxseed oil or flaxseed (2.5% or 5%). Tumour volume was lower in rats fed the basal diet plus SDG or flaxseed. Moreover, established tumour volume was reduced significantly when the rats were fed flaxseed oil, which contains alpha-linolenic acid.[15] Flaxseed has also been shown to have a protective effect against colon cancer in rats.[16]

Do Flaxseed and Other Lignans Have Anticancer Properties in Humans?

The answer to this question is, Perhaps. Lignans have been shown, for example, to suppress the differentiation and growth of cultured human leukemic cells, possibly by interfering with DNA, RNA and/or protein synthesis. Moreover, lignan cytotoxicity on normal immune cells appears to be low.[17, 18] Population studies of diet and disease risk also suggest an anticancer role for lignans and other phytoestrogens. Populations with high intakes of phytoestrogens — such as the Japanese and Chinese, who typically consume a low-fat, high-fibre diet rich in isoflavonoids from soybeans and lignans from vegetables and grains — have lower incidence and mortality rates of breast, endometrial and prostate cancers. Western populations tend to consume low-fibre, high-fat diets and to have a higher risk of these cancers.[19] Population differences can be seen in plasma levels of isoflavonoids, which are higher among Japanese men than European men,[20] and in urinary levels of mammalian lignans and isoflavonoids, which are higher among vegans and lactovegetarians than omnivores.[12] Studies of the anticancer effects of flaxseed and other lignans are suggestive but not conclusive. Not all studies, for example, have shown an effect of flaxseed consumption on plasma androgen and SHBG levels.[21] Long-term studies of flaxseed effects in women with breast cancer are underway.