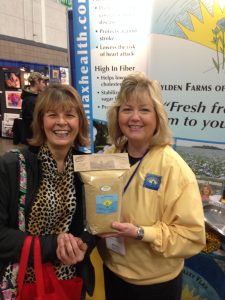 Esther at Fargo show with Facebook winner of flax bag

Flaxseed is recognized as a “functional food” because of its generous content of the essential fatty acid, alpha-linolenic acid (ALA) and the precursor of mammalian lignans, secoisolariciresinol diglycoside (SDG). Each promises to play a positive role in reducing the risk of a major health threat: ALA in coronary heart disease,[1] and lignans with respect to cancer.[2] Health professionals have raised the question of how well these components survive the hazards of oxidation and heat under common conditions of flax storage and food preparation. The answer is, surprisingly well.

ALA, in isolated form or as a component of an extracted purified oil, is generally considered susceptible to oxidation[3] because it is highly unsaturated; that is, it has three double bonds in its 18-carbon chain. Oxidation is encouraged by both warmth (autoxidation) and light (photo-oxidation).[4]However, ALA in the intact seed of flax has proven remarkably resistant to oxidation despite the fact that it makes up about 50-59% of the oil in flaxseed which in turn is normally 35-45% of the seed weight.[3] Why this is so remains a question but the facts are clear, as represented by current research.

Flaxseed, either whole or coarsely ground, appears stable to long-term storage at room temperature. Even after 308 days at 22°C (72°F) there was essentially no change in peroxide value as a measure of oxidation by-products or in the percentage of ALA in fat extracted from the stored flaxseed samples.[5] This demonstration of oxidative stability in common storage was later confirmed by direct measurement of oxygen consumption. One gram samples of whole flaxseed, milled flaxseed and extracted flax oil were held in individual sealed glass tubes for 280 days at room temperature with 12h alternating dark/light cycles. All three preparations showed little change in headspace oxygen during this time although the flax oil sample was more variable. The fatty acid composition of all three samples remained unchanged, suggesting that flaxseed ALA was stable to both heat and light.[6]

These stability results with small samples have been corroborated by studies on l kg lots of milled flaxseed which were stored in closed packages at 23°C for 128 days. The samples were examined initially and at approximately thirty-day intervals. The packages were triple-layer paper bags with plastic liners, much like those used in the 60 lb. bags normally supplied to commercial bakers. Sensory tests by a trained panel showed no difference in the aroma intensity of water slurries of fresh and stored samples at any of the four storage intervals. Changes in chemical indices of oxidation (peroxide values, free fatty acids and volatile compounds) were negligible.[7] As further evidence of flaxseed’s storage stability, 36 consumers could not tell the difference between the taste of yeast breads baked with the either fresh or stored milled flaxseed included as 11% of flour weight in the recipe.[8]

ALA in whole and milled flaxseed also appears to be stable to heat equal or greater than the temperatures involved in baking batters and doughs such as muffins and yeast bread. Thermal stability was shown in 1992 by the absence of significant changes in peroxide values and fatty acid composition when both forms of flaxseed were heated for 60 minutes at either 100°C (212°F) or 350°C (662°F). Furthermore, gas liquid chromatography showed no signs of new trans isomers of ALA or of cyclic fatty acid formation in samples subjected to these degrees of heat.[5] In a follow-up study the proportion of ALA in the fat of a muffin mix, where 28.5% of the formula was milled flaxseed, was virtually unchanged after baking at 178°C (350°F) for 2h (45.1% ALA before: 45.0% after). This stability was observed even though oxygen consumption of the flaxseed muffin mix was considerably greater than that of the control muffin mix.[6] A subsequent study confirmed the stability of ALA in baked muffins containing the same amount of milled flaxseed and noted that thiobarbituric acid values, as estimates of ALA oxidation were also unaffected by baking.[9]

On reflection, the baking stability of ALA should not be surprising considering that the internal temperature of a muffin approaching doneness would not be expected to exceed the gelatinization temperature of starch. Wheat flour in the presence of sugar, or honey in this instance, would gelatinize around 95°C (203°F), much lower than the temperature of hot air in the oven from which heat is transferred to the baking product. A further margin of safety for the ALA-conscious consumer is the fact that muffins are usually baked for only 20-25 min. at 204-208°C (400-425°F) in contrast to some experimental conditions.[4]

Biological evidence also supports the stability of ALA to baking temperatures. Nine college women included 50g flaxseed in their daily diet for four weeks in one of two ways. Five of them added milled flaxseed, uncooked, to the food of their choice such as breakfast cereal, soup, juice or yogurt. The other four consumed bread baked with milled flaxseed (250g/kg) rather than their usual bread. Plasma fatty acid profiles during the four-week study were not significantly different between the women eating raw milled flaxseed and those eating the same amount of flaxseed baked in bread. Both subject groups exhibited a lowering of serum total cholesterol and low-density-lipoprotein cholesterol.[10] The implication is that baking had no effect on the bioavailability of flaxseed fatty acids.

SDG, the precursor of mammalian lignans in flaxseed, is a phenolic substance associated with the plant fibre.[11] Because phenolic structures are common to a number of commercial antioxidants[4] and because purified lignans as well as flaxseed extracts have shown antioxidant effects in vitro and/or in vivo,[12], it is tempting to speculate that SDG may play a role in the storage and/or baking stability of ALA. The amounts of SDG in flax appear to vary with the variety of flax, its growing location and harvest year.[13] Each of these variables has been found to affect the amount of mammalian lignans produced from flax ingestion.[14]

While there is currently little information on SDG stability to common storage, several studies suggest that there is no significant loss of SDG from flaxseed during the baking process. Muir and Westcott[15] reported in 1996 that the amounts of SDG measured chemically in both the crust and centre of a loaf of bread agreed well with measurements of SDG in flaxseed added to the dough. As well, the levels of SDG that they detected in four loaves of flaxseed bread purchased at local bakeries were within the range of values likely from the original addition of 7% flaxseed. In 1998, Rickard and colleagues,[16] using in vitro fermentation,[17] assessed total lignan production from a number of commercial breads and homemade products. Bread, muffins and pizza dough containing 6.9, 8.0 and 13.2% flaxseed respectively, were baked at 190°C (375°F). In both commercial and homemade categories, lignan production reflected the amount of flaxseed added. This was also the case in pancakes enriched with 6.2% flaxseed which were griddle-baked at 205°C (400°F). Furthermore, urinary lignan levels from nine women who ate 25g flaxseed daily for eight days were similar whether the flaxseed was eaten raw in applesauce or baked in muffins or bread.[16] It appears that the lignan availability from the SDG in flaxseed is stable to customary baking temperatures.