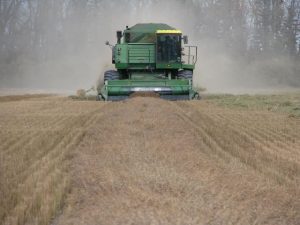 The major plant lignans include secoisolariciresinol diglucoside (SDG) and matairesinol. The bacterial flora in the colon metabolizes SDG to enterodiol (ED) and enterolactone (EL), which are referred to as mammalian lignans. Because mammalian lignans have chemical structural similarity to the natural estrogen, 17-Beta-estradiol, they are thought to have weak estrogenic or antiestrogenic properties and, therefore, have protective effect against hormone-related diseases such as breast cancer. The richest source of mammalian lignan precursors is flaxseed, with levels greater than 100 times that in other oilseeds, cereal grains, vegetables and fruits (1). Hence we hypothesized that flaxseed has a protective effect against breast cancer in part due to its lignans.

For more than a decade, we have been conducting research on the effect of flaxseed and its lignans on the different stages of breast cancer — i.e. initiation, promotion, progression and metastasis. We also have been studying the effect of early life exposure to flaxseed and lignans on breast cancer risk. Many of the results have previously been reviewed (2-4). This paper provides an overview of our recent research findings.

Mammary (breast) gland development starts with the formation of the terminal end bud (TEB) structures, which differentiate (transform) to the alveolar buds (ABs) and then to lobules. Previous animal studies have shown that carcinogen exposure when the number of TEBs is very high, results in a higher incidence and number of tumors later in life (5). On the other hand, exposure to carcinogen when the TEBs are low in number because they have differentiated to the ABs and to lobules, results in low incidence and number of tumors. Hence any dietary modification that enhances the differentiation of the TEBs to ABs and lobules early in life may reduce the risk of breast cancer in adult life.

We previously have demonstrated an increased differentiation of the TEBs to ABs in the mammary gland of female offspring of dams fed 10% flaxseed or the equivalent amount of SDG during the lactation stage (6). This did not occur when the flaxseed or SDG was fed to the dams during pregnancy, or to the offspring at post lactation stage (6,7). Therefore an objective of one of our recent studies was to determine whether the increased differentiation in the mammary gland structure of the offspring exposed to flaxseed or its lignans during suckling would indeed result in reduced breast tumorigenesis.

Pregnant rats were fed the basal diet (BD) based on AJN-93 diet (8) until the birth of the offspring. They were then divided into three groups and fed the BD or BD supplemented with either 10% flaxseed diet (10F) or SDG equivalent to the amount present in the 10F during the lactation period. At postnatal day 49-51, at proestrus phase, the offspring were gavaged with 5 mg of the carcinogen dimethylbenzanthracene and fed the BD. Palpable tumors were monitored for 19 weeks. Results showed significant reduction in tumor incidence of 31% in the l0F group and 42% in the SDG group compared with the BD group. The number of tumors/rat was lower by 46% in both the 10F and SDG groups. The total tumor load was also reduced by 51% in the 10F group and by 63 % in the SDG group. The effect of l0F did not differ significantly from that of the SDG group indicating that the effect seen was primarily due to the lignans in flaxseed. Therefore, exposure of the offspring to lignans through the mother’s milk (9) during the suckling period enhanced the mammary gland development, which then lowered the risk of tumor development upon exposure to carcinogen later in life.

Effect of flaxseed during tumor progression and metastasis

As we have previously reviewed (2-4), studies in our laboratory have shown that 5% flaxseed fed to carcinogen-treated rats at the preinitiaton stage of carcinogenesis can reduce the nuclear aberration, tumor incidence and number. When given at the early promotion stage of carcinogenesis, 5% flaxseed resulted in significant reductions in tumor size. At the later promotion stage when tumors are established, reduction in tumor size was also observed with flaxseed treatment. Similar results were observed when SDG at the levels present in 5% flaxseed was fed to rats, indicating that the effect of flaxseed is in part due to its lignans. Because all these studies were conducted in carcinogen-treated rats, however, it is unclear if the effects seen in rat tumors will be the same in human tumors. It is also unknown if flaxseed and its lignan component can reduce the metastasis stage of the cancer process. Therefore, in our recent work, we determined the effect of flaxseed on the growth and metastasis of human breast cancer cells using the athymic mice (immunodeficient and therefore do not reject human tissues) model.

After acclimatization for one week, athymic mice were injected with the MDA MB 435 human breast cancer cells and then fed the BD control. The estrogen receptor negative MDA MB 435 cell line was used because it is known to metastasize in the animal model while estrogen receptor positive cell lines such as MCF-7 cells do not. After 7 weeks, when the tumors were already established, the mice were divided into two groups so that both groups have similar weights and palpable tumor size. One group was continued on the BD while the other group was fed the 10F. Palpable tumors were monitored for 7 weeks after which the mice were sacrificed and examined for metastasis.

To determine which component of flaxseed was responsible for the above effect on metastasis, the experiment was repeated with the following modifications: (a) Seven weeks after tumor cell injection, groups of mice were fed either the BD or BD supplemented with either l0F, SDG, flaxseed oil (FO) or combined SDG and FO. The SDG and FO were at levels present in the 10F diet. (b) The primary tumors were excised prior to giving the treatment diets.

Results showed no significant differences between the 10F, SDG, FO and SDG+FO groups in metastasis incidence but only the 10F, FO and SDG+FO groups differed significantly from the BD control. The fact that the SDG and FO groups had consistently lower metastasis incidence than either the FO or SDG groups, indicate that the effect of flaxseed on estrogen receptor negative cancer cells was in part due to the combined effect of its lignan and oil components.

Effect of flaxseed on women with breast cancer

Because flaxseed has been shown to reduce the growth of established tumors in the animal model, we conducted a randomized, placebo controlled double blind study in postmenopausal patients (n=39) diagnosed with breast cancer for the first time. Tumor core biopsy tissues and urines were taken at the time of diagnosis and at the time of surgery. During the interval (mean 39 days), patients were randomized to take a daily supplement of muffins without (placebo) or with 25 g flaxseed. Significant reductions in tumor Ki67 labeling index (an indicator of cell proliferation) and CerB2 labeling index (an indicator of tumor aggressiveness) and significant increases in tumor cell apoptosis (programmed cell death) and urinary lignan excretion (indicator of flaxseed intake compliance) were observed in the flaxseed fed group but not in the placebo group. This confirms the ability of flaxseed to reduce tumor growth observed in the animal studies.

Effect of flaxseed vs. soy on estrogen metabolites in postmenopausal women

Estradiol (E2) is the biologically active estrogen most often associated with mammary tumorigenesis. E2 is first oxidized in the liver to estrone (El) and then hydroxylated by the cytochrome P450 enzymes, 2-hydroxylase and 16alpha.-hydroxylase, to mainly 2-hydroxyestrone (20HE1) and 16alpha-hydroxyestrone (16aOHE1). The biological properties of these two metabolites are distinct in that, 16a.OHE1 is generally viewed as an estrogen agonist, while 20HE1 is believed to have minimal biological activity (10). Hence, it has been suggested that a low 2/16a-OHEI ratio may be an endocrine biomarker of breast cancer risk (11-13).

Phytoestrogens including the isoflavones (i.e. genistein and daidzein) rich in soybeans and the precursors to mammalian lignans (i.e. enterolactone and enterodiol) rich in flaxseed, have structural similarity to estrogen suggesting that these compounds may modulate estrogen metabolism and hence affect breast cancer risk. Therefore we conducted a randomized, double blind, placebo controlled study to examine and compare the effect of flaxseed or soy supplementation on the urinary estrogen metabolites 20HE1 and 16a.OHE1 in postmenopausal women.

Postmenopausal women (n=48) were randomized into three groups and supplemented their diets with either a placebo muffin (control), or muffin containing 25g ground flaxseed or ground soy daily for 12 weeks. 24hr urines were collected at week 0 (baseline) and week 12 and analyzed for mammalian lignans, soy isoflavones, and estrogen metabolites. Urinary lignans and isoflavones were analyzed by GC-MS (14) and the estrogen metabolites with the commercially available kit, ESTRAMET (Immuna Care Corporation, Bethlehem, PA), a competitive, solid-phase enzyme immunoassay, values which correlate highly with those obtained through GC-MS (15).

Flaxseed and soy supplements resulted in significant increases in the urinary estrogen metabolite 20HEI. While flaxseed also significantly increased the ratio of 2/l6a-OHE1, soy did not. Further, the ratio at 12 weeks in the flaxseed group was significantly higher than the l2-week ratio in both the soy and placebo groups. Soy endpoint ratio was not significantly different from placebo.

Mean urinary total phytoestrogen content for placebo, soy and flaxseed groups were 3.69, 17.56 and 40.73 u.mol/day, respectively. Linear regression showed a significant positive relationship between the change in urinary lignans and the change in 2/l6a-OHEl ratios within the flaxseed group. When similar comparison was made between changes in urinary isoflavones and the metabolites within the soy group, no significant relationship was observed.

The results suggest that (a) diet supplementation with 25g flaxseed significantly alters estrogen metabolism to a greater extent than that seen with the same amount of soy, in postmenopausal women, (b) this modulation may have antiestrogenic effect by increasing the proportion of less biologically active estrogen, 20HEl, relative to the estrogenic 16aOHEl, and (c) the observed effect may be related to the higher lignan content of the flaxseed. These observations may shed light on a novel metabolic pathway through which flaxseed may confer protection against the development of breast cancer.

Our animal and in vitro studies to date suggest that flaxseed plays a role in the prevention and treatment of breast cancer and that the lignans may in part be responsible for its effect. The nature of the effect depends on the stage of the cancer process at which flaxseed and its lignans are introduced in the diet. Only limited studies in humans, particularly in breast cancer patients, have been conducted but the results so far are promising. However, long-term studies in patients particularly those taking breast cancer drugs such as tamoxifen need to be conducted to further assess the application of flaxseed in breast cancer treatment.

Reprinted from the Proceedings of the 58th (or 59th) US Flax Institute Symposium, with permission