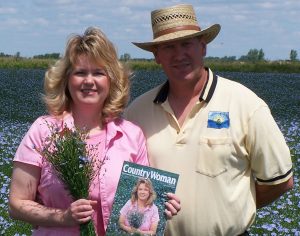 Flaxseed contains two components that favourably affect the immune system: alpha-linolenic acid (ALA), an essential omega-3 fatty acid, and lignans, a type of phytoestrogen. These components affect immune cells and mediators of the immune response such as eicosanoids and cytokines. ALA, for example, suppresses the proliferation of peripheral blood mononuclear lymphocytes and the delayed hypersensitivity response to certain antigens.[1] Recent research suggests that ALA and lignans in flaxseed modulate the immune response and may play a beneficial role in the clinical management of autoimmune diseases.[2, 3]

Flaxseed Effects on the Immune System

The ALA component of flaxseed influences immunity — the body’s ability to defend itself successfully against foreign substances — through its effects on membrane phospholipids and the production of eicosanoids and cytokines. Lignans influence certain mediators of the immune response.

ALA and other omega-3 fatty acids influence the immune response by altering the fatty acid composition of membrane phospholipids, which in turn significantly affects eicosanoid production. ALA in flaxseed increases phospholipid ALA, EPA and DHA levels in mononuclear cell,[4] neutrophils,[5] lipoproteins,[5], [6] and platelets.[7] This change in membrane phospholipid content results in reduced biosynthesis of arachidonic acid from linoleic acid and decreased production of the proinflammatory eicosanoids, leukotriene B4 (LTB4) and thromboxane A2 (TXA2),[8], [9] shown in Figure 1. Increasing the ALA and omega-3 fatty acid content of membrane phospholipids enhances the biosynthesis of postgladin I3 (PGI3) and other eicosanoids of the 3- and 5-series that are less inflammatory.[10]

Eicosanoids are a group of biologically active compounds derived from polyunsaturated fatty acids such as arachidonic acid.[9] In rats, mice and cynomolgus monkeys, ALA suppresses tissue levels of arachidonic acid and the biosynthesis of eicosanoids, but not to the same extent as EPA and DHA.[8], [11], [12] In humans, prostaglandin biosynthesis is also influenced by ALA intake. In one study, six healthy women consumed isocaloric formula diets providing a constant amount of linoleic acid and different amounts of ALA (0%, 4% and 8% of total energy); each formula diet was consumed for two weeks. Total prostaglandin biosynthesis decreased nearly 50% at the highest ALA intake level.[13] In a study of a single male subject, the urinary excretion of metabolites of TXA2 and PGI2 decreased 34% during the seven week period in which the subject consumed a mix of flaxseed and canola oils.[14] In another study, PGE2 and thromboxane B2 production was inhibited significantly when subjects (28 healthy men) consumed a flaxseed oil-based diet for eight weeks.[4]

Cytokines are soluble proteins liberated from immune cells in response to injury, infection or exposure to foreign substances.[15] Two cytokines that contribute to inflammation are tumour necrosis factor (TNF) and interleukin-1 (IL-1). Both are present in rheumatoid joints and contribute to the tissue pathology of rheumatoid arthritis; [16] and they stimulate the release of platelet-activating factor, a potent mediator of inflammation.[3] The production of TNF and IL-1 by macrophages is influenced by dietary ALA and the ALA to linoleic acid ratio.[17] Consumption of a flaxseed-oil based diet for eight weeks, for example, resulted in an inhibition of TNF and IL-1 b production of about 77-81% in a study of 28 healthy men.[4] Several studies have demonstrated significant reductions in TNF and IL-1 levels in humans consuming omega-3 fatty acids.[18]

Flaxseed may prove useful in the nutritional management of patients with autoimmune diseases. For example, systemic lupus erythematosus (SLE) is an inflammatory disease that occurs mainly in young women. It is characterized by a variety of clinical findings, including inflammation of the kidney (nephritis). Studies show that patients with SLE exhibit increased production of platelet-activating factor (PAF), a mediator of immune response and promoter of platelet aggregation.[19] Dietary flaxseed has provided significant benefits in animal models of lupus nephritis and in patients with this condition.[3] In one study of nine patients with lupus nephritis, PAF-induced platelet aggregation was inhibited and renal function improved when subjects consumed 15 to 45 g flaxseed/day for four weeks.[20] The lignan component of flaxseed is believed to be responsible for this effect.[21]

Flaxseed Has Favourable Effects on the Immune System

Flaxseed favourably influences immune response. The flaxseed component, ALA, alters membrane phospholipids, inhibits arachidonic acid biosynthesis from linoleic acid, inhibits the production of proinflammatory eicosanoids from arachidonic acid, and suppresses lymphocyte proliferation and cytokine production.[22], [23] Flaxseed lignans are potent inhibitors of platelet-activating factor, a mediator of inflammation.[3] Through these effects, flaxseed has the potential to be used for the treatment of disorders characterized in part by activated lymphocytes and a hyper-stimulated immune response. Such disorders include rheumatoid arthritis, psoriasis, multiple sclerosis and systemic lupus erythematosus.[3], [24]