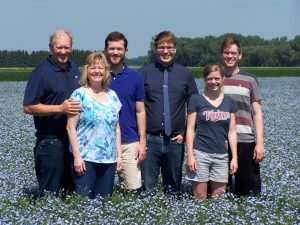 Populations with high intakes of alpha-linolenic acid (ALA)[*] have a low risk of cardiovascular diseases such as coronary heart disease (CHD) and stroke. ALA is an essential omega-3 fatty acid found mainly in plants—flaxseed, for example, is the richest source of ALA in the North American diet.[1] ALA is the precursor of the long-chain omega-3 fatty acids eicosapentaenoic acid (EPA) and docosahexaenoic acid (DHA).

It has been known since the 1970s that native fishing populations in Greenland, Japan and Alaska have low rates of CHD, despite eating a high-fat diet. Their low CHD risk is associated with their high intake of EPA and DHA from marine fish and mammals.[2], [3] (Fish contain only trace amounts of ALA).[4]

These long-chain omega-3 fatty acids have been shown to reduce blood triglycerides, increase blood HDL-cholesterol, reduce blood pressure, reduce platelet reactivity and reduce neutrophil activity—all actions that help lower CHD risk.[5], [6] ALA also offers protective effects against both CHD and stroke, and its effects appear to be distinct from those of EPA and DHA.

What Are the Effects of ALA on Blood Lipids and CHD Risk?

ALA, like other dietary polyunsaturated fatty acids, influences physiological processes and disease risk. Results of relevant clinical and epidemiologic studies are described below.

Another study of 10 young, healthy men and women found that plasma total cholesterol was reduced 6% and LDL-cholesterol was reduced 9% following the consumption of flaxseed muffins providing 50 g flaxseed/d for four weeks. Plasma HDL-cholesterol and triglycerides did not change during the flaxseed supplementation period.[8] In 15 hyperlipidemic men and women who had just completed a study of the effect of vitamin E supplementation on serum lipids and lipid oxidation products, the addition of 15 g milled flaxseed to their daily diet produced significant reductions in blood total cholesterol (-7%) and LDL-cholesterol (-11%) without changing HDL-cholesterol levels. Blood triglycerides decreased slightly but not significantly during the intervention.[9]

Overall, the findings from clinical studies suggest that modest reductions in total cholesterol and LDL-cholesterol levels can be achieved, without a change in HDL-cholesterol levels, by adding flaxseed to the diet. Substituting ALA for saturated fats in the diet enhances its beneficial effect.[12]

The results of epidemiologic studies suggest that ALA has particular effects related to CHD risk. Researchers with the Lyon Diet Heart Study hypothesized that ALA may have unique antiarrhythmic and antithrombotic properties that significantly reduce fatal CHD events. All participants in this study had previously survived a myocardial infarction. Those who consumed a Mediterranean-type diet rich in ALA experienced a reduction in myocardial infarction (MI) and cardiac deaths of nearly 70%, without a reduction in blood cholesterol and triglycerides, compared with a control group who consumed their usual Western-type diets.[13] In an extended follow-up to this study, the protective effect of the Mediterranean diet was maintained. As in the original analysis, ALA—but not EPA and DHA—was significantly associated with protection against recurrence of MI.[14]

Data from the Health Professionals Follow-up Study, which began in 1986 with a cohort of 51,529 health professionals aged 40 to 79 years, found a specific preventive effect of ALA. An age-adjusted analysis of dietary fat intake and risk of MI among 43,757 men who participated in the 1992 survey, found that ALA as a proportion of total energy was inversely associated with risk of MI and fatal coronary disease. The effect of ALA was independent of other dietary and non-dietary risk factors. Intake of marine omega-3 fatty acids (EPA and DHA) was not associated with MI risk in this study, suggesting that the cardiovascular effects of ALA are different from those of EPA and DHA.[15]

In the Multiple Risk Factor Intervention Trial (MRFIT), ALA intake as a percentage of total energy was inversely associated with mortality from CHD, cardiovascular diseases and all causes among subjects assigned to the usual care intervention. MRFIT was a primary prevention trial among 12,866 men aged 35-57 years who had a high risk of developing CHD due to their smoking, blood pressure and blood cholesterol status.[16]

An analysis of data from the Nurses’ Health Study likewise showed that female nurses (n=76,283) in the highest quintile of ALA intake had a lower relative risk of fatal and nonfatal MI compared with those in lower quintiles. The Nurses’ Health Study began in 1976 with a cohort of 121,700 female, registered nurses aged 30-55 years.[17] These findings support the hypothesis that higher intakes of ALA protect against fatal cardiac events.

What Are the Effects of ALA on the Risk of Stroke?

ALA may reduce the risk of stroke, according to data from the MRFIT trial. An analysis of MRFIT subjects with fatal or nonfatal incident strokes who been followed for 6.9 years found that the ALA content of blood cholesterol esters and phospholipids was inversely associated with stroke risk. Each standard deviation (SD) increase in ALA was associated with a 30% reduction in stroke risk.[18]

How Does ALA Protect against Cardiovascular Diseases?

ALA has two biologic effects that may explain how it protects against stroke, arrhythmia, myocardial infarction and other cardiovascular events. These effects include the following:

ALA Modifies Membrane Phospholipids: The ALA content of blood phospholipids, triglycerides and/or cholesteryl esters can be increased 2-8 fold by supplementing the diet with flaxseed or flaxseed oil and spread for four weeks.[19], [20], [21] Increasing the omega-fatty acid content of membrane phospholipids increases membrane fluidity and alters membrane function, changes that may reduce cardiovascular disease risk by influencing calcium ion exchange across the cell membrane.[22]

ALA Interferes with Eicosanoid Production: ALA competes with linoleic acid and the delta-6-desaturase enzyme that converts linoleic acid to arachidonic acid (20: 4n-6). Arachidonic acid is the precursor of eicosanoids (i.e., prostaglandins, thromboxanes and leukotrienes), many of which promote platelet aggregation, vasoconstriction and other thrombotic activities.[2] Interventions that reduce the formation of these eicosanoids may help protect against cardiovascular diseases. Caughey and co-workers[23] reported, for example, that the synthesis of thromboxane B2 (a metabolite of thrombozane A2) and prostaglandin E2 was significantly decreased by ~30% in healthy men who consumed a flaxseed oil diet for four weeks.