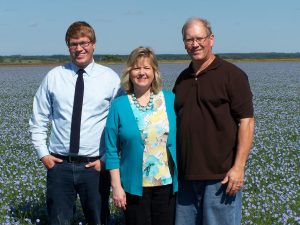 Hylden family in a field of flax

Flaxseed reduces the production of major systemic markers of inflammatory activity, including eicosanoids, cytokines and platelet-activating factor. Regular consumption of flaxseed may influence the progression of atherosclerosis, an inflammatory disease.

Atherosclerosis is an inflammatory disease. Its origins are in infancy and childhood when the earliest lesions, called fatty streaks, begin to develop in arteries.[1] Fatty streaks consist only of monocyte-derived macrophages and T lymphocytes—two types of immune cells whose presence in arterial walls provides evidence that the inflammatory response contributes to atherosclerosis.[2] Recognizing the role of inflammation in atherosclerosis suggests a new approach to cardiovascular disease prevention and treatment: Developing interventions that alleviate chronic inflammation and may retard the progression of atherosclerosis.

Flaxseed inhibits the production of pro-inflammatory cytokines and lipid mediators derived from arachidonic acid (an omega-6 fatty acid) and thus reduces inflammatory responses. This effect is likely due to one or both of the following constituents present in flaxseed: alpha-linolenic acid (ALA), the essential omega-3 fatty, and lignans, which are phytoestrogens that exhibit antioxidant, antimitotic and antifungal activity.[3] With its unique fatty acid profile, flaxseed is the richest source of ALA in the North American diet—ALA constitutes 57% of the total fatty acids in flaxseed.[4],[5] It is also the richest source of lignans, providing 75-800 times more lignans than other plant foods such as legumes, cereals, vegetables and fruits.[6] ALA and lignans appear to influence inflammatory responses by different mechanisms.

Atherogenesis and the Inflammatory Response

The earliest changes in atherogenesis occur in the arterial endothelium. For reasons that are not entirely clear, the endothelium becomes more permeable to lipoproteins and immune system cells such as monocytes, T lymphocytes and leukocytes. The migration of these immune cells into arterial walls is mediated by oxidized low-density lipoprotein (LDL), cytokines and other blood factors. (Cytokines are proteins synthesized and released by macrophages, leukocytes, neutrophils and other cells; they both initiate and amplify inflammatory responses.[7]

Fatty streaks consisting of lipid- and cholesterol-rich monocytes, macrophages and T lymphocytes begin to form in arteries. This process is stimulated by the adherence and aggregation of platelets and by several mediators of the inflammatory response, including growth factors, cytokines such as interleukin-1 and tumor necrosis factor, and thrombaxane A2 an eicosanoid derived from arachidonic acid. Refer to the table for a list of key inflammatory mediators.

With continued inflammation, the fatty streaks progress to advanced, complicated lipid-filled lesions. Eventually, a fibrous cap forms. Formation of the fibrous cap represents a healing response to the injury and is mediated by the actions of interleukin-1, tumor necrosis factor and other cytokines. When the advanced lesion becomes unstable, the plaque ruptures, causing a thrombosis that may result in myocardial infarction or stroke.[2]

Flaxseed inhibits the production of pro-inflammatory eicosanoids, such as thrombozane A2, and other lipid mediators, such as platetet-activating factor (PAF). (PAF is a biologically active compound that is derived from arachidonic acid and is involved in many immunopathological reactions.) Flaxseed also inhibits the release of several inflammatory cytokines—namely, tumor necrosis factor-œ (TNF-a), interleukin-1ß (IL-1ß) and interleukin-6 (IL-6).[8],[ 9] Cytokines and lipid mediators derived from arachidonic acid have been implicated in the pathology and development of certain clinical features of chronic inflammatory diseases such as systemic lupus erythematosus (SLE)[10] and rheumatoid arthritis.[11] For example, PAF production is increased and its catabolism decreased in patients with SLE.[8]

Caughey and co-workers[12] demonstrated that consumption of flaxseed oil by healthy men for four weeks reduced the production thrombozane B2, prostglandin E2, TNF-alpha and IL-1beta by about 30%. (Thromboxane B2 is an inactive metabolite of thromboxane A2.) The flaxseed oil used in this study provided about 14 g ALA per day, but it contained a negligible amount of the lignans, which are nearly completely removed during the oil-refining process. Caughey’s findings agree with those of other studies showing anti-inflammatory effects of omega-3 fatty acids in animals and humans.[13]

Clark and co-workers[14]showed that PAF-induced platelet aggregation was inhibited significantly in nine patients who consumed 15 g or 30 g flaxseed daily for four weeks. The patients all met the criteria for the diagnosis of SLE. In rat models of renal diseases characterized by glomerular scarring and poor renal function, whole flaxseed and flaxseed oil retarded the progression of renal injury and the decline in renal function.[15], [16 ] A 15% flaxseed diet also inhibited PAF-induced platelet aggregation in mice.[16]

Mechanisms of Action of Flaxseed’s Constituents

The constituents in flaxseed that exhibit anti-inflammatory actions are ALA and lignans. ALA and the other omega-3 fatty acids block the conversion of linoleic acid, an essential omega-6 fatty acid, to arachidonic acid, and they inhibit the synthesis of pro-inflammatory eicosanoids derived from arachidonic acid. ALA is itself converted to the long-chain fatty acid eicosapentaenoic acid (EPA). EPA is converted to eicosanoids that are less biologically active than those derived from arachidonic acid and hence do not promote inflammation and platelet aggregation.[17]

Flaxseed lignans are PAF-receptor antagonists and thus block the pro-inflammatory actions of PAF.[16] Furthermore, lignans may act like other antioxidants in blocking the oxidation of LDL particles and decreasing their deposition in arterial walls. The oxidation of LDL is believed to be a key pathological event in the development of atherosclerosis.[18]

Flaxseed inhibits the production of major systemic markers of inflammation, including pro-inflammatory eicosanoids, cytokines and platelet-activating factor. These effects have been demonstrated in animals, healthy volunteers and in patients diagnosed with systemic lupus erythematosus. A regular intake of flaxseed may help treat coronary heart disease and stroke by reducing blood cholesterol levels, and it may help retard the progression of atherosclerosis by reducing inflammatory responses.