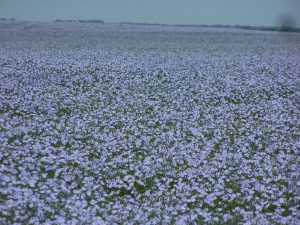 Studies of Paleolithic nutrition and modern hunter-gatherer populations suggest that humans evolved on a diet different from today’s typical North American diet. The diet of hunter-gatherers was lower in total and saturated fat and contained small but roughly equal amounts of omega-6 (n-6) and omega-3 (n-3) long-chain fatty acids (LCFAs), giving an n-6/n-3 ratio of about 1: 1.[1] Paleolithic humans ate diets containing appreciable amounts of omega-3 fatty acids provided by plants and the fat of wild game.[2] Technological developments over the last 100 years have contributed to a shift in fat consumption patterns. Specifically, the intakes of trans fatty acids, found mainly in products made with hydrogenated vegetable oils, and omega-6 fatty acids, found in vegetable oils and animal products derived from grain-fed livestock, have increased over the past century.[3] Compared with the Paleolithic diet, the modern North American diet is high in total and saturated fat, omega-6 fatty acids and trans fatty acids, and low in omega-3 fatty acids. This imbalance has led some nutrition experts to recommend increasing omega-3 fatty acid intake. Omega-3 fatty acids are now known to be essential for infant growth and development and to protect against heart disease, thrombosis, hypertension and inflammatory and autoimmune disorders.[3]

Is There an Additional Requirement for Omega-3 Fatty Acids during Pregnancy and Lactation?

Is there an Optimal Dietary Ratio Omega-6 to Omega-3 fatty acids?

The current dietary n-6/n-3 ratio ranges from about 10:1 to 25:1, indicating that typical North American and Western diets are low in omega-3 fatty acids compared with the Paleolithic diet on which humans evolved.[3] Health Canada recommends a ratio of 4: 1 to 10: 1, particularly for pregnant and lactating women and infants.[6] The FAO/WHO joint committee recommends a ratio of between 5: 1 and 10: 1 and advises individuals consuming diets with a higher ratio, to consume more foods containing omega-3 fatty acids such as green leafy vegetables, legumes and fish and other seafood.7 The U.S. Food and Nutrition Board has not specified a dietary recommendation for the n-6/n-3 fatty acid ratio.[4]

What Are the Recommended Dietary Intakes of Essential Fatty Acids for Adults?

What Is the n-6/n-3 Fatty Acid Ratio of Flaxseed?

Flaxseed contains more than three times as much omega-3 as omega-6 fatty acids, giving an n-6/n-3 ratio of 0.3:1. By comparison, the ratio for corn oil is 58:1; for soybean oil, 7:1; and for canola oil, 2:1. The high level of alpha-linolenic acid in flaxseed makes it a good source of plant omega-3 fatty acids in the North American diet.

Is There an Optimal Intake of Alpha-Linolenic Acid?

Do Infants Require Omega-3 Fatty Acids for Growth and Development?

DHA is rapidly incorporated into the lipids of the brain and retina during the last trimester of pregnancy and the first year of life. Preterm infants fed formula rich in DHA, for example, develop visual acuity more rapidly than those fed standard infant formula low in omega-3 LCFAs.[9] It is now widely recognized that dietary omega-3 fatty acids, particularly DHA, are required for the optimal development of the nervous system and maturation of visual acuity in preterm and term infants.[10], [11]

Is Alpha-Linolenic Acid Alone Sufficient to Meet the Needs of Infants for Omega-3 Fatty Acids?

If DHA is essential for the growth and function of the retina and brain, then how important is alpha-linolenic acid (ALA) in the diets of infants? The data are not entirely clear on this point. Using visual acuity as an indicator of infant development, two studies have shown that feeding formula containing at least 2% ALA to low-birth-weight infants[12] and three-month-old infants[13] resulted in developments in visual acuity equivalent to that seen in breast-fed infants. These studies suggest a specific role for ALA in visual development. Other studies, however, suggest that ALA alone is not sufficient to meet the EFA needs of infants and that infants have a specific dietary need for DHA.[14], [15] Very-low-birth-weight infants, for example, are unable to synthesize sufficient omega-3 LCFAs from ALA to maintain the usual level of incorporation of omega-3 LCFAs into plasma and erythrocyte phospholipids[16] Thus, preterm infants appear to require dietary DHA because they are unable to synthesize sufficient DHA from soybean oil-based formula.[9]

Should Infant Formula Be Supplemented with ALA, DHA and/or EPA?