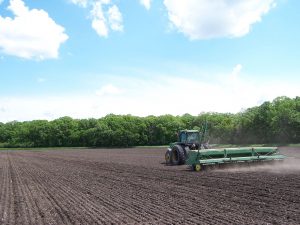 Flaxseed is the richest source of the phytoestrogen lignans, containing 75-800 times higher concentration than other plant foods in the vegetarian diet. It is also a very rich source of a-linolenic acid, representing more than 50% of its oil. Because these compounds have been suggested to have anticancer effects, flaxseed is a food that has a very high potential to reduce cancer risk.

Therefore, for more than a decade, our laboratory has been studying the effects of flaxseed and its components on the different stages of carcinogenesis, particularly breast cancer. These studies have shown that feeding flaxseed to rats prior to initiation with the mammary carcinogen dimethylbenzanthracene resulted in lower mammary cell nuclear aberration, tumor incidence and number (1, 2). When fed at the post-initiation or early promotion stage of carcinogenesis, flaxseed reduced the tumor size and number (2). At the late promotion stage, flaxseed regressed the established tumor size (3). A regression in tumor size was also suggested by the reduced cell proliferation in the tumor of breast cancer patients given flaxseed from the time of diagnosis to the time of surgery (4). Furthermore, reduction in tumor size and metastasis was observed upon feeding flaxseed to athymic mice (immunodeficient mice) with established human estrogen receptor (ER) negative tumors (MDA MB 435) (5,6). The antitumorigenic effect of secoisolariciresinol diglycoside (SDG), the major mammalian lignan precursor in flaxseed, was similar to those of flaxseed (3,7) indicating that the effect of flaxseed is largely dependent on its SDG. Despite these observations, there is very little known regarding the effect of flaxseed on human ER positive breast cancer under controlled conditions of high or low levels of estrogen simulating conditions in pre- and post-menopausal women, respectively. There is also limited study on the interaction of flaxseed with breast cancer drug such as tamoxifen (TAM). Interaction has been studied in ER negative breast cancer cells but not in ER positive cells (8).

TAM is a well known adjuvant therapy for breast cancer particularly those that are ER positive (9). However, TAM poses a few problems. It is usually good for only five years, beyond which patients develop TAM resistance — i.e. tumors start growing again (9). There is also a small risk of endometrial cancer and blood clots in some individuals. Because TAM is an antiestrogen, it also causes menopausal-like symptoms such as hot flashes. Thus many breast cancer patients taking TAM report increasing use of complementary dietary supplements including phytoestrogen-rich foods such as soy and flaxseed, instead of taking hormone replacement therapy, to reduce menopausal-like symptoms and also to supplement the tumor-reducing effect of TAM (10). However, we question whether phytoestrogen-rich foods such as soy and flaxseed interfere with the effectivenesss of TAM. Studies with soy are controversial because some studies showed complementary effect of TAM with soy products such as miso (11) while other studies showed interference by genistein, a soy isoflavone (12). Nevertheless, we hypothesized that flaxseed complements rather than antagonizes the tumor reducing effect of TAM. This is because some of the mechanisms whereby TAM and flaxseed and its lignans reduce tumorigenesis are similar and/or complementary — e.g. hormone-related mechanisms such as antiestrogen and anti-aromatase (enzymes involved in estrogen synthesis) activities; non- hormone related mechanisms such as antioxidant, anti-angiogenesis, increasing apoptosis, and affecting growth factor expression (decrease IGF-1 and TGF-a., increase TGF-b) (5,6,9,13–15). In particular, the anti-aromatase activity of the flaxseed lignans is of interest in light of recent studies, which showed that some aromatase inhibitors are more effective in reducing tumor growth than TAM (16).

Therefore the overall objectives of the following studies were: to determine the effect of flaxseed and TAM, alone and in combination, on the growth of ER positive human breast cancer cells (MCF – 7) and uterus in athymic mice in the presence of high or low levels of circulating estrogen, simulating pre- and post-menopausal conditions, respectively, and to determine if the effect of flaxseed is dose-dependent.

Specific objective: This study was conducted to determine the effect of flaxseed and TAM, alone and in combination, on ER positive breast cancer at low level of circulating estrogens.

Methods: Ovariectomized athymic mice (balb/c nu/nu) were acclimatized for one week while being fed the basal diet (BD; AIN-93G). At week 0, they were then injected with 5xl05 MCF-7 cells at 4 sites (right and left thoracic and abdominal mammary fat pads) and implanted with estradiol pellet (1.7 mg, 60 day release; Innovation Research of America, Sarasota, FL) to allow the tumors to grow. Weekly palpation of the tumors started two weeks after the tumor injection. At week 7, when the tumors were about 40 mm2, mice were divided into 5 groups such that their tumor sizes were similar. One group had the E2 pellet replaced and served as the positive control (+E2 group). The other four groups had the E2 pellet removed and not replaced so they all had low circulating levels of estrogen. One group was fed the BD and served as a negative control (-E2 group). The other three groups were treated as follows: fed a 10% flaxseed diet (l0F), fed BD and given an implant of TAM pellet (5mg; TAM group; will result in blood TAM levels equivalent to that in women taking 20 mg TAM daily), or fed 10% flaxseed plus given TAM implant (IOF+TAM). Tumor palpation was continued until week 13 for the +E2 group and at week 14 for all the other groups. The +E2 group had to be sacrificed earlier because of their large tumors. The tumors were measured for volume and weight and analyzed for cell proliferation (as Ki67 labeling index) and apoptosis (by Tunel technique). Uterine weights were also noted.

Conclusion: In the presence of low circulating estrogens, flaxseed reduced the growth of ER positive human breast cancer and enhanced rather than antagonized the tumor inhibiting effect of TAM but caused no significant effect on uterine weight when fed alone or in combination with TAM treatment. The tumor regression was related to a reduction in tumor cell proliferation and an increase in cell apoptosis.

Specific objective: This study was conducted to determine the effect of flaxseed, alone or in combination with TAM, on the growth of ER positive human breast cancer in the presence of high level of estrogen to simulate premenopausal conditions.

Methods: The study design was similar to that in Study 1 except that after the tumors have reached the size of about 40 mm2, the mice were divided into 5 groups: One group had the E2 pellet removed and not replaced and served as the negative control (-E2 group). The other groups had the E2 pellet replaced so they all had high circulating levels of estrogen. One group was fed the BD and served as a positive control (+E2 group). The other three groups were treated as follows: fed a 10% flaxseed diet (1 OF), fed BD and given an implant of TAM pellet as above (TAM), or fed 10F plus given a TAM implant (10F+TAM). Treatment time was 6 weeks.

Conclusion: At high E2 level, 10F and TAM alone had an antitumorigenic effect on ER+ tumors without increasing uterine weight. In combination, 10F and TAM induced greater inhibitory effect on tumor growth than when used alone. The effect of 10F and TAM, alone or in combination, was related to decreased cell proliferation and increased apoptosis.

Specific objective: This study was conducted to determine the dose-dependent effect of flaxseed, alone and in combination with TAM, on the growth of ER positive human breast cancer in the presence of high level of estrogen to simulate premenopausal situation.

Methods: The study design was the same as in Study 2 except that two additional groups were tested i.e. 5% flaxseed (5F) and 5F in combination with TAM (5F+TAM), and the treatment time was 7 weeks.

Results: Compared with the positive control, all treatments did not affect the food intake and body weight but significantly reduced the palpable tumor growth over time and the tumor volume and weight at animal sacrifice. The tumor size in the 10F group was significantly lower than that in the 5F group and did not differ significantly from that in the TAM group. When flaxseed was combined with TAM, the tumor size was further reduced with the greatest effect observed with 5F. The uterine weight was not affected by all the treatments except in the case of the 5F+ TAM group, which showed significantly lower uterine weight than the 5F group.

Flaxseed inhibited the growth of ER+ MCF 7 human breast cancer in nude mice in the presence of high or low levels of estrogen. The effect of flaxseed at high estrogen level was dose dependent. Flaxseed enhanced rather than antagonized the inhibitory effect of TAM on the growth of ER+ human breast cancer in nude mice. TAM and flaxseed components reduced the tumor growth by decreasing the tumor cell proliferation and increasing apoptosis. Other mechanisms likely include those that have been mentioned earlier. The results are encouraging and provide some scientific justification for the clinical testing of flaxseed in both pre- and post- menopausal breast cancer patients taking TAM. If similar results are observed in patients, then flaxseed may be consumed with TAM to help reduce TAM resistance i.e. tumor growth after prolonged intake of tamoxifen.

Thanks to NSERC and NIH for financial support, and to Omega Products for supply of flaxseed.